Please give a big CM9798 welcome to our latest guest blogger as Jack McInroy has stepped into the Jamaica hot seat. Can he inspire the Reggae Boyz to World Cup glory…or at least further than their real life escapades?

In 1998, Jamaica qualified for the World Cup for the first (and so far only) time. I was at school at the time, and a friend, who was mixed race and knew my grandad was Jamaican, asked me who I’d support if the Reggae Boyz met England in the second round. England, I said, without hesitation. Just two years early I had cried my eyes out when we exited Euro 96, and though I was also rooting for Jamaica and Scotland, my heart was with England.

The meeting never happened. Jamaica went out in the group stage and England met an Argentina side that had beaten them 5-0. Generally in CM 97/98 it goes the same way – they might win a game, but they always go out in the first round.

But this is a chance to do it all over again. Can I cause the greatest shock in World Cup history and take the Reggae Boyz to glory? And can I make up for my split loyalties?

It’s no surprise they always do so badly as there’s only eight Jamaican players in the game: Rufus Brevett, Danny Maddix, Fitzroy Simpon, Robbie Earle, Paul Hall, Marcus Gayle, Dwight Marshall and Deon Burton. Unfortunately, the 14 domestic-based players that went to the World Cup are not in the database, including all three goalkeepers. It’s a shame to miss out on Theodore Whitmore, Donovan Ricketts, Ian Goodison, and especially Ricardo Gardner, but don’t fear, I’ve got a plan.

There are several players who switched allegiances in the years after CM 97/98’s release, giving up hopes of an England call-up. I’ve gone into the data editor and changed the nationalities of Michael Johnson, Richard Langley, Micah Hyde, Darryl Powell, Jamie Lawrence, Trevor Benjamin, Kevin Lisbie, Darren Byfield, Barry Hayles, David Johnson, Jason Eull and Frank Sinclair. Most of these players didn’t make their debuts until the 2000s, and only Frank Sinclair went to the World Cup, but I give them all an early call-up.

That takes me up to 20 players. I don’t have a single goalkeeper and don’t want to put an outfield player between the sticks, so I undertake a long search through the database and Google and turn up the unattached Mel Capleton, who I’m almost certain is of Jamaican descent. He gets a call-up, as do the eligible Linvoy Primus and Terry Angus, who’ll bolster the defence. That takes me up to 23 players and I’ll never have to use the Player Search or Shortlist functions because nobody else exists to call up.

I’ve also updated the colours so it’s green text on yellow (rather than black on green) and I’ve made Jamaica an EEC country so all my players continue to be eligible to play without work permits.

Looking at my players, we won’t be among the favourites for the competition, and the squad is heavily weighted toward (lower league) strikers, but I’m not complaining. Everything’s gonna be irie.

I’m not sure why the Football Association are arranging friendlies rather than the Jamaican Football Federation, but regardless, it’s a good mix of opposition.

Well this is far from ideal. I only have 10 players available due to club commitments (and an injury). Frustratingly, the game doesn’t give you space-filler greyed-out players like it does at club level (and like it will to the opposition). Perhaps it’ll be good practise for if we ever get a red card.

Ghana have a lot of firepower and I actually start to fantasise about managing them instead, but they won’t be at the World Cup and we will. I play a modified version of ultra defensive and we get a 1-1 draw.

I consider cancelling all the friendlies and clicking through to the World Cup, but I’ve got a couple of non-league players and I’m hoping that when they become internationals they’ll get moves to bigger clubs where league matches don’t clash with internationals. Plus the next game is against Malta, how hard could that be?

We only have 9 players against San Marino, but beat them by the same score, and our friendly with Portugal is cancelled when they find themselves in a World Cup play-off. I arrange a local derby against St Vincent, a game we should be able to win with 10 players and no subs. We don’t. It’s 2-2, the mononymous Yorke winning man of the match.

I expect Holland away to be carnage, and it is. On the surface the stats are quite bleak, but looking at it another way, if Mel Capleton can save 15 shots in every match I will have unearthed a gem, especially if we keep up our 100% shot-to-goal conversion rate.

On 26th March, eight months into the season, we get our first proper international break and I can try out a formation that involves 11 players.

But Italy are just too good, arguably the best team in the world. I start to worry about the fact that even with all my players available, I don’t have anyone with a set piece rating of more than 8 and half a dozen players haven’t played any league games all season.

Next up is England, and again, I’m back to having 9 players. It’s almost like you’re not supposed to manage the minor nations.

Argentina beat us 4-0 (Batistuta getting all the goals), meaning we’ve conceded 23 goals in four games against top opposition. I hope it’s character building, and the final friendly, against Zambia, seems like it’s been set up as a morale boost. For me, I mean, not the players. We scrape a 2-1 win.

The World Cup draw is about as kind as I could hope for, considering we’re fourth seed in a group of 4.

I have to call-up a minimum of 22 players for my World Cup squad. I decide to call up all 23 and I take some encouragement from the fact that Barry Hayles has had a big money move to the Premier League 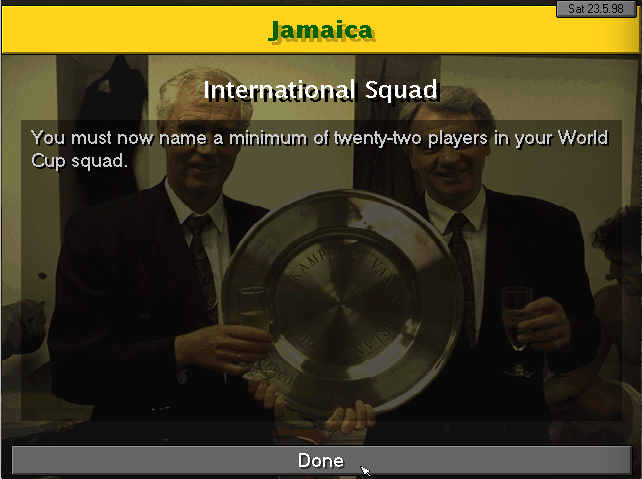